The bronze medallist in the long jump of the European Championships in Munich will headline the long jump competition at the national indoor meeting in Lyon (MNIL). He wants to start his indoor season there in the most beautiful way.

Bronze medalist at the European Championships in Munich, Largely leader of the French balance sheet in 2022 and eleventh best French performer of all time (8M17), Jules Pommery will be expected at MNIL for his first real length contest in four months. It doesn't scare him, On the contrary. He sets high goals for the coming season and is bolstered by a very satisfactory form in training.. Maintenance.

You haven't jumped competitively since 10 September, in Pescara. Will the Lyon meeting be the opening of your season? ?

This will be the official opening of my season, Yes. Before I go on an internship in Reunion Island, of the 9 at 18 December and I will do the meeting of Reunion Island, the 17 December, as an evaluation of the internship. 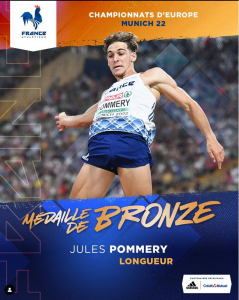 What will be the program for the rest of your winter season ?

I have a schedule, This is the ideal calendar. I'm going to go to Torun (8 February, Poland) and Liévin (12 February). Then there will be the France championships (18 and 19 February in Aubière), Madrid on 22 February and the European Championships (of the 2 at 5 March in Istanbul). Lyon launches a good season normally !

Does your bronze medal at the European Championships in Munich change anything in your season scheduling? ?

Of course it changes my programming. It will allow me to enter meetings where it would have been more complicated before.. There are meetings at the gold label in which I could enter without too much difficulty. It also allows me to comfort myself in the ranking. The European Outdoor Championships will help me for the European Indoor Championships.

Regarding the goals you set for yourself, This medal gives confidence and allows you to aim higher ?

Yes, I did two jumps over eight meters last season. There I feel that in training I am ahead of last year. It gives me confidence and it gives value to the training we did. (he is coached by Robert Emmiyan, European record holder in the long jump). That is, I don't say to myself "I trained for nothing."It's paying off so it gives me confidence and I tell myself I can jump further..

It is to make eight meters easily already. It has to become my base so that I can hope to make jumps to eight meters 15-20 or 30. After ranking targets, it's obviously first at the France championships and on the box in Europe like this summer. That would be cool ! 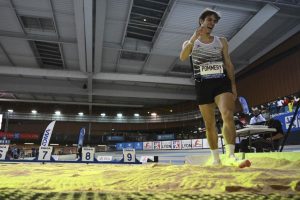 How the preparation works ? Have you recovered well from the summer season ?

I took a little break, one week-ten days, but we resumed quietly, which allowed me not to lose too much since the summer season. I capitalized well on my fitness. There we are still in the phase where it is heavy training. It's cash register, lots of twists etc.. We are not too specific yet. We'll soon get into it. It's going to be a ramp-up. I'm fit, There are no injuries or even small alerts. I must continue on this path.

Last year you won the MNIL competition with a jump to 7 Metres 97. What memories do you have of it ?

It was a great meeting, Loved the track. I had moved back a meter from my usual marks because it returned a lot. But I loved it, There was a good atmosphere. Frankly it's a good recovery meeting. I hope to win again.

Are you a little superstitious? ? When there are venues or stadiums that do you well, Do you want to go back ?

This is not superstition, But yes when we are welcomed we tell ourselves that we can go back without problem. I think the organization will be at least as good as last year. Now it's up to me to do the work.

What convinced you to come back this year? ?

Already the fact that it is in France, It's nice, it's close. And then because the organization was good, We were welcomed, we ate well. The course of the competition was good, there was no measurement error or too long a wait time. It's a simple meeting as we like them. It's on a human scale but it's well organized.

You hope to jump 8 meters from this first competition, in Lyon ?

At the moment we are still on ten-stride jumps, it's 30-35 meters of momentum against 53 normally. With that I'm around seven meters 75-80-85. While knowing that we are at one training a day. I feel super fit so obviously the goal will be to jump eight meters, At least. It's ambitious but I feel capable.